Airport improvements taking off at the Ak-Chin Regional Airport

The Ak-Chin Regional Airport recently announced the completion of electrical upgrades to improve its safety and utility. Continue to read more here. The Ak-Chin Regional Airport recently announced the completion of electrical upgrades to improve its safety and utility. These improvements include the placement of runway edge lighting, illuminating the airport beacon, and installing an automated weather observation system. The runway edge lights line the length of the 4,751-foot runway. In addition, the airport beacon is now illuminated at night to provide a wayfinding aid for aircraft. These improvements allow the airport to be open 24 hours a day. The automated weather observing system (AWOS) is a system of weather instruments used by airports throughout the country to transmit weather information to pilots and the flying community. The tool provides data on wind, altimeter, temperature, cloud height, precipitation and other factors about the weather. Certified and commissioned by the Federal Aviation Administration (FAA), the system usually reports in real time. 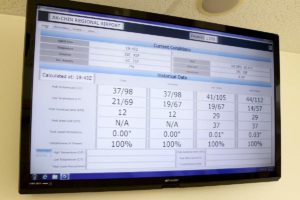 Interestingly, the AWOS system does not provide information on dust levels. If there is a dust storm in the area, pilots receive information about visibility. If the visibility is less than the FAA “visual” minimum of 3 miles, pilots will know that it’s not safe to land at the airport. The airport is owned and operated by the Ak-Chin Indian Community and offers a gateway to points throughout central and southern Arizona. The Ak-Chin Regional Airport is home to 16 general aviation aircraft. Most airport traffic comes from aviation training and visiting aircraft. Also, pilots will often land to refuel due to the airport’s lower fuel prices. These and other upgrades are part of a 20-year master plan to provide continuous improvement to the Ak-Chin Regional Airport. “We have completed vital aviation infrastructure for our business,” said Tim Costello, manager of the Ak-Chin Regional Airport. “The series of upgrades as laid-out in our master plan are steadily moving forward. Each completed project will help create a more welcoming environment for aviation.”