Find out who is leading the pack of saddle bronc riders heading into the 2014 Wrangler National Finals Rodeo and everything from earnings to statistics. Leading the pack of saddle bronc riders in first place is 2x World Champion Taos Muncy from Corona, New Mexico. He enters Las Vegas with $126,878 in season earnings for his seventh trip to the Wrangler National Finals Rodeo. Last year Muncy placed in seven rounds at the WNFR and he will use his experience to stay in the driver’s seat this year.
Milford, Utah is sending four brothers in this event alone. The oldest brother, Cody Wright is a 2x World Champion and is making his 12th WNFR appearance. He is only $13,000 behind Muncy which is a go-round win away from taking the lead. 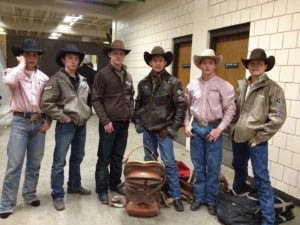 The Wright Brothers at the 2013 Wrangler NFR

Cody won Round 9 and Round 10 last year to finish third in the world standings. Nebraskan Cort Scheer is looking for his first gold buckle. He enters the WNFR in third place with $102,413. Scheer from Elsmere recently returned from the Canadian National Finals Rodeo with the average title. He is a tough contender and is making his fourth WNFR trip.
Heith DeMoss from Heflin, Louisana will arrive in fourth place with $92,574. DeMoss a crowd favorite is likely to set the arena on fire with his showmanship for riding bucking horses. This year he won Rodeo Houston and is making his sixth WNFR. Rounding out the top five is Jacobs Crawley from Stephenville, Texas. Crawley is nearly $38,000 behind the leader but he is consistent. Last year he won the WNFR average title and placed in four rounds. Wade Sundell from Boxholm, Iowa is no stranger to the WNFR. This will be his sixth consecutive qualification since 2009. In March he cashed a $100,000 check for winning THE AMERICAN. Sundell is also looking for his first world championship. In 2013 he won Round 3 with an 86-point ride on Big Stone, Moreno & Growney’s Big Muddy, won Round 6 with an 87.5-point ride on Burch Rodeo’s Lunatic Fringe and placed in four other rounds.
Lucky number seven belongs to Tyler Corrington from Hastings, Minnesota. Corrington’s year has been memorable he just won the 2014 Canadian World Championship in November, was married in October and December could be his triple crown if he wins the gold buckle. Gretchen Kirchmann’s interview with Jesse Wright at the Wrangler NFR during Round 4 on December 8, 2012

The 2012 World Champion Jesse Wright enters in eighth place with $77,495 and a penny. Wright and his twin brother Jake along with Cody and Spencer are breaking new ground this year with four siblings qualifying in the same event. Jesse won the 2014 Wrangler Champions Challenge Finale and the 2014 RAM Wilderness Circuit Finals. This will be his fifth trip to the WNFR.
Rounding out the top 10 is 2x World Champion Chad Ferley from Oelrichs, South Dakota. Ferley is the reigning world champion making his eighth trip to the WNFR and had big wins at signature PRCA rodeos including Cheyenne, Ellensburg and Deadwood in 2014. He won Round 2 of the 2013 WNFR with an 87.5-point ride on Frontier Rodeo’s Tip Off and placed in six other rounds on his way to jumping from third to first in the final world standings with $204,432. Fellow South Dakotan Cole Elshere enters the WNFR as number 11 in the world standings. In 2014 he won 10 PRCA rodeos. The 24-year-old cowboy is portraying legendary bronc rider Casey Tibbs in the documentary Floating Horses by Justin Koehler. Tibbs won six world championships between 1949 and 1955 making him one of the greatest bronc riders in history.
“Hot Sauce” DeMoss aka Cody DeMoss enters his 10th WNFR in 12th position. DeMoss the older brother to Heith is also from Heflin, Louisiana. He missed the 2013 WNFR but in 2012 he won Round 10 and was the lone saddle bronc rider at the WNFR to ride all 10 horses. He won the average title with a score of 798.5 points and finished second in the world standings by $797 behind Jesse Wright.
Two more Wright brothers round out the 13th and 14th WNFR positions. The youngest Wright at the WNFR is Spencer making his début in 13th place. Overall there are 13 Wright siblings, seven brothers and six sisters. In 2012 he won the Resistol PRCA Saddle Bronc Riding Rookie of the Year. Jake Wright, the older twin to Jesse enters with $59,795.45. This is Jake’s third consecutive trip to the WNFR since 2012. Last year he won Rounds 1, 4, 7 and 8 to earn an event-best $106,270 and advance from seventh place to second in the final world standings with earnings of $194,365.
Dustin Flundra from Pincher Creek, Alberta is the lone Canadian competing in the classic event of rodeo. He won the prestige Calgary Stampede in July and is a 3x Canadian Champion.