Artist and Ak-Chin Indian Community member Joseph Smith has been drawing and sketching since his childhood. He began creating pencil drawings at age 6 and has continued through his adulthood, working a full-time job and honing his craft on the side. At age 35, Smith began oil painting, continuing to teach himself. 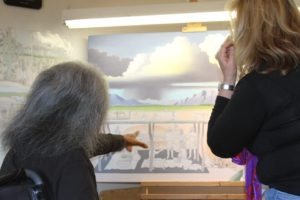 Years ago when Smith was carving kachinas, a music director at the now-closed Phoenix Indian School saw a newspaper article about him and she asked to see his carvings. When they met, she also saw his drawings and asked him about putting them into oil paintings. The expense of oil painting was a challenge to Smith, but the music director sent him a package full of art supplies to help him get started. Smith is now retired and can paint every day. “Whenever I feel run-down, I can come in and hit the canvas,” he says. “I lock all the world outside. It’s relaxing.” Over time, Smith estimates he’s created between 300 and 400 paintings. He will often begin a scene and let it sit for a time, moving on to a different painting and jumping back and forth among various images in process until he completes them. Smith envisioned the Desert Oasis sculpture in front of Harrah’s Ak-Chin Casino, then sketched and painted it. The sculpture depicts a saguaro cactus and women gathering water at the mouth of a creek. The plaque in front of the sculpture reads: “This statue is dedicated to the land, as well as the plants, animals and people who call the desert home.” The artist, Snell Johnson, took Smith’s drawing and painting, and while making some modifications he was able to produce the Desert Oasis sculpture as it stands today.
Smith’s paintings are currently on display in the Ak-Chin Indian Community office headquarters, the Him-Dak Eco-Museum, library, council chambers and in the Ultra-Star Multi-tainment Center at Ak-Chin Circle. From time to time, Smith continues to paint all types of signs when requested from the community. Over the years, Smith enjoyed painting landscapes and outdoor scenes. Now he depicts The Ak-Chin Indian Community cultural ceremonies and events. Recent works include paintings of traditional basket dancers, an Oktoberfest celebration and a chicken scratch dance. He tries to portray these events as they happened in the past. Smith enjoys creating images of these traditions, hoping it gives younger people the opportunity to learn about The Ak-Chin Indian Community events and celebrations. Smith remembers going to ceremonies and participating in traditional dance while he was growing up though these events aren’t as common today. Smith says the museum and other community resources are trying to keep the Ak-Chin language and traditions alive by talking to youth in the language, and through ceremonies and classes. He hopes his artwork will also help remind youth of their Ak-Chin heritage.
Feel free to visit the Ak-Chin Indian Community and it’s Him-Dak Eco-Museum, Library and UltraStar Multi-tainment Center at Ak-Chin Circle to view and enjoy Smith’s art.