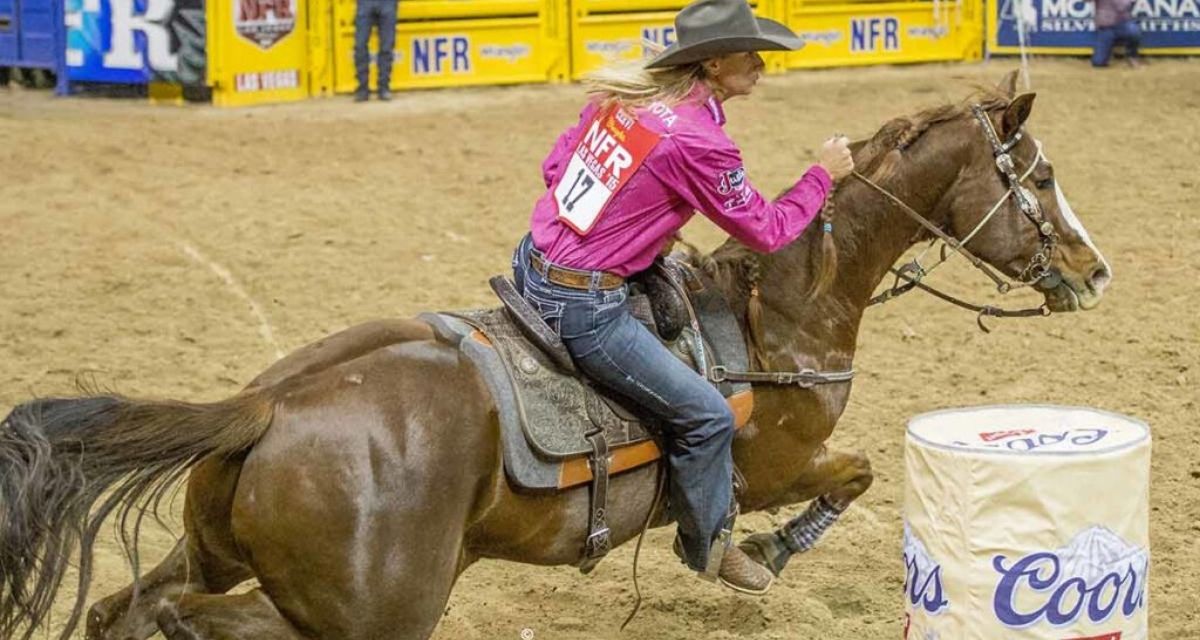 Cowboy Lifestyle Network’s Official PRCA Athlete of the Month is 4-Time World Champion Barrel Racer from Marana, Arizona, Sherry Cervi. This flawless horsewoman is one of the toughest barrel racers to compete against in the WPRA and won the World Title at the 2013 (WNFR) Wrangler National Finals Rodeo in Las Vegas, NV. In fact, Cervi also won World Titles in 1995, 1999, and 2010, qualifying a staggering nineteen times for the National Finals Rodeo. Not only is Sherry Cervi a 4-Time World Champion Barrel Racer, she is also an extremely accomplished horse trainer and breeder. This highly determined and self-disciplined lady is a true role model for any cowgirl. If you have ever had the privilege to watch Sherry Cervi compete during a live barrel racing event, then you have witnessed how she raises the bar when it comes to competition at rodeos. It’s no secret that rodeo is in her blood. Sherry’s parents both competed as well and her mother made it to the National Finals Rodeo in Oklahoma City three times as a barrel racer, while her father competed in the very first NFR as a calf roping contestant.

If there is anything else that Sherry is known for is her golden steed that stole the heart of cowgirls across the country, “Stingray”. The iconic mare could capture anyone’s heart and everyone knew her immediately. Stingray, or MP Meter My Hay, was raised by Sherry’s father at their ranch in Marana, Ariz., and the now 18-year-old mare was Cervi’s ProRodeo mount for nine years. In her career, Stingray carried Cervi to the 2010 and 2013 WPRA world titles, set the previous arena record of 13.49 seconds at Las Vegas’ Thomas & Mack, was voted by the top 15 barrel racers as the Horse with the Most Heart in 2013 and has been a big part of Cervi’s record-setting $3.2 million ProRodeo earnings. It was about three years ago when Cervi decided the mare had nothing left to prove on the cloverleaf. She was retired to the breeding barn to start raising the next generation of quick, Sting Ray babies. Which she has done quite successfully. Fun fact about Stingray, she is a half-sister to Hailey Kinsel’s mare, Sister. They share the same stud on their papers, it just goes to show that winning runs in the family. “Seldom in life are you given a second chance. Take advantage of all opportunities as they present themselves to you. To be the best you can be, you must strive to surpass yourself, not the competition. You can be a champion and you can succeed at anything in life if you allow yourself to do so. Go after what you want with intensity, grit, and determination. Keep focused on the goal. Always remember that there is no substitute for hard word, discipline and dedication.”

“In my life, I have had the good fortune of making my goals and my dreams become reality. Several years ago, I set a new goal for myself to take horses my parents bred and raised to ultimately compete on them at the National Finals Rodeo and other major barrel racing and futurity events. That dream is my today and I hope to continue it for many more years to come.”